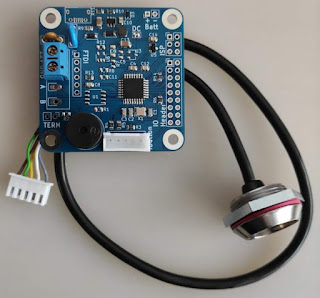 As you maybe know, the OHS gateway 2.x offers except standard arm away mode also arm home mode.
This allows gateway to monitor only zones, that you manually setup out of specific group, while in arm home state. This change required also some changes in authentication mechanism. As authentication nodes I offer does not have any keyboard to differentiate between arm home and arm away state, they do it based on time the iButton is connected to the probe. That is, short touch and the group receive an arm away command, while long (over 1 second) touch of the probe, and group receive arm home command.

This working quite well, but after using it for several months I found out that the disarm command also waits for the end of scanning period (1.4 second), trying to recognize arm home / away command. Which had me wondering I put the iButton correctly many times while disarming. Then I realized it does not have to wait for it at all. Simply there is no need, as the disarm command does not differ as arm state. Luckily the node already knows which state the group is in. Realizing all that, I've updated the authentication node sketches and put new version on GitHub. Now the scanning period has two different time values, 1.4 second for arm state, and 0.4 second for disarm state. It just feels more comfortable to disarm if you receive instant feedback.

While on it, I've also updated the set default function, to make it more clear what and where is all set. And then, I've used these changes to propagate values of the elements. Hopefully making it simpler to understand. Feel free to update.

One more small hardware change, I've changed the iButton probe connector and matting PCB connector to JST X2.54, it is much flatter then previously used connector allowing it to fit in narrower spaces.