Over last weekend I've created a Travis continuous integration for OHS 2.x gateway repository. This CI performs a test build on every commit that is pushed to it. What it does is that it verifies that the commit is buildable, and maybe more importantly, it creates new compiled firmware related to every new commit, and places it back in releases section directly in GitHub.

This means that the latest, and also historical firmware are now available for download in https://github.com/vysocan/OHS_2-gateway/releases 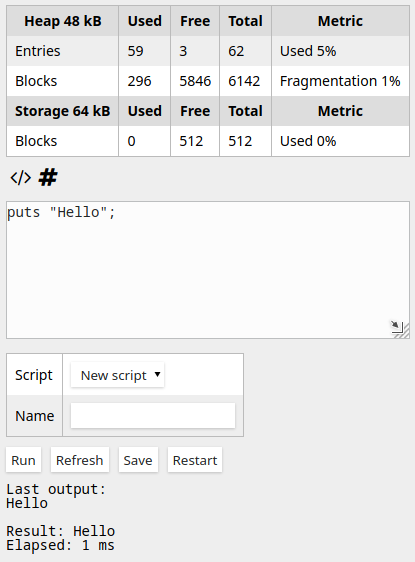 TCL scripts is a new functionality in OHS 2.x. They allow various enhancements to be added by users to the automation part of the gateway. As the base of TCL language I used the following library: https://github.com/zserge/partcl, and embed it into gateway firmware. Scripts are handled by a separate thread that has a queue that serves all incoming scripts, and passes the result back asynchronously as a call back. Scripts are using their own separated heap, provided by umm_malloc library, that performs great heap management. Embedded SPI FRAM is used as storage for scripts with 64kB of available space. I have written a simple block access library called uBS (micro block system) that allows basic read write operations.

Scripts also have their own tab in the web interface, which allows you to create and run the TCL scripts directly on the gateway. As shown on the picture, there is statistics about the heap and the storage used by scripts. as well as helper icons </> and #. The </>, when you hover over it, shows build in language helps. And the # shows all variables currently in heap with their values.
Button "Run" passes the edited script into execution queue. "Refresh" button simply refreshes the page, allowing the "Last output:" to be seen. "Save" stores the script with given name to uBS storage, and allows this scripts to be assigned to triggers and timers.
Due to performance limitations, since scripts are not primary function of the gateway, there are build in limits to maximum script execution time, and maximum script interactions.

An important part of the language is command substitution, when the result of a command inside square braces is returned as a part of the outer command, e.g. puts [+ 1 2] performs addition of 1 + 2 and passes the result to puts.

Currently the only data type of the language is a string. Even numbers are stored in string format and converted to numeric types when needed.
Any symbol can be part of the word, except for the following special symbols:

Partcl interpreter is a simple structure which keeps the current environment, array of available commands and a last result value. Interpreter logic is wrapped around two functions - evaluation and substitution.

Substitution:
Evaluation:
Each command has a name, arity (how many arguments is shall take - interpreter checks it before calling the command, use zero arity for varargs) and a C function pointer that actually implements the command.

Email ThisBlogThis!Share to TwitterShare to FacebookShare to Pinterest
Labels: script

Just started to update new page section for gateway 2.x configuration. It can be find in menu on right. It will describe basics terminology for OHS, new shell interface for OHS 2.x gateways and of course a web interface used to configure the functionality.  Currently it is work in progress, but I will try to add all sections that are missing, and finish it as primary guide for new users.