I did not post too much updates recently, but I was quite busy with new version of gateway. I manage to draw and let fabricate new PCB with 32bit ARM chip as main controller. For the purpose of first design I have shrunk the PCB to 100x100mm, but I have managed to squeeze all component I wanted there. Good news is that I was able to stay on 2 layers, and avoid much more expensive 4 layer PCB. I made the board at pcbway with the cheapest 6/6 method and the quality stays similar to my free boards. I will stay with them for sure.

After realizing that 100x100mm PCB includes all I need, I will most probably stay with this new format. To sum up there is:

I guess it will pretty decent update to existing ATMega1284P. 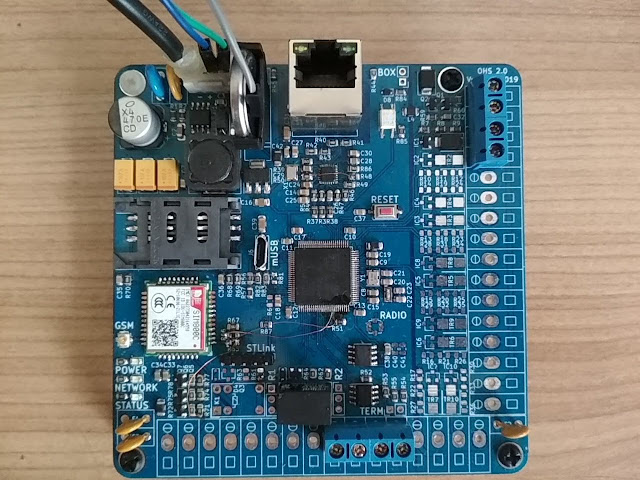 I've made some mistakes during design of the PCB, also I forgot to wire some signals, or got them wired wrong. But, at least, I've managed to get the whole thing running with few cuts of traces here, or jumper wires there. Only hardware part, that I did yet tried, is wireless. After I manage at least initiate, send and receive some test packet I will go for new PCB revision with all corrections and the hardware part may be then ready.

I have already new sketch with addition to mount other then on-board 2G SIM800C. Basically there will be option to have SIM800C mounted, or there will be 2x5P connector to connect other modems like SIM7600 4G modems.