With new version of hardware in fabrication, I have turned back to software side of gateway. I have made significant improvements in zone thread and also improved the alarm event thread (AET). It stays, that it can handle 3 simultaneous alarm events at once. That is the software is able to wait for authentication when you enter one zone, while setting alarm for any other two, or any combination.  Additional  AET can be added, but 3 should be enough for any normal household or property. Overflowing event will not be lost, but logged, and if reoccurring it will trigger AET again. In real scenario your inner house zones will have authentication time set to 0 seconds, and they will be properly handled by AET in no-time. Only time the AET will overflow is when your local SWAT team enter your house by every window at once. Still it will set alarm On and notify you and you neighbours :).

I have reworked time keeping mechanism. Mainly inspired by simple idea that the NilRTOS, that is used for gateway, can trigger thread periodically at any given millisecond interval. I have tossed away routine, that was asking RTC chip connected by TWI/I2S every time software was needing exact time. And instead created a new timer thread with 1 second wakeup interval. There the thread increase internal second counter, keeping the time available to other threads. Also there is 2 byte counter that will sync with RTC chip when it overflow, that is every 2^16 seconds, at least once a day. It nicely give back some processing power to all threads as TWI/I2S transfers are only 400kbs.

With all that I was able to get back to original idea of having not only a security system, but also a sensor gateway. All started with unifying authentication nodes and sensors. Now they are put together simply as nodes in web interface, and they can also have name assigned along with address and local number. This further improves registration and handling of sensors. I added new feature, or better new type of node. An input node that represents a remote relay, switch or any other output resource that can be addressed by float point value. It works astonishingly well and it does not matter if the node sits on wired or wireless network.

Another news are new feature sets called triggers and timers. As name imply it will do just that :), but I will leave it for new blog post. I think it is worth it.

Also PCB's are fabricated and waiting for shippment.
Posted by vysocan at 20:17 No comments:

After busy summer, I had finished testing all other features of 1.6 gateway. All went fine and no additional change to layout is needed then the problematic W5500 PHY part. And I have sent to fabrication new version of Gerber called GW 1.7.

Here is the final render: 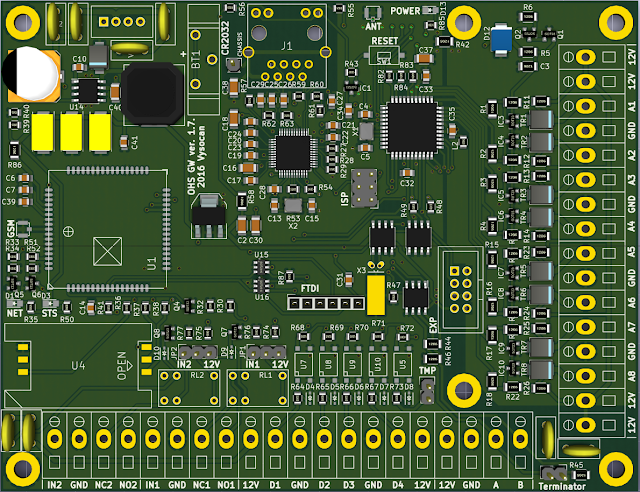