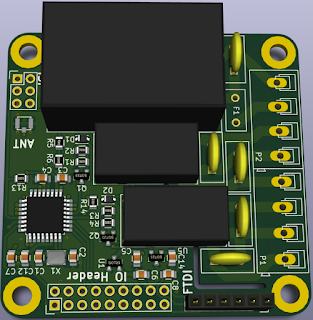 Lately I started prepare mains powered relay board. It will sport 100-240VAC switching power supply delivering 3W at 5V. Then two 10A relays, rest will be as usual ATMega328P with RFM69 receiver. PCB design is almost ready and as soon as I get all parts I send it for fabrication. Size will increase to 56*58mm to accommodate all new components. There will be possibility to have onboard thermometer and switching power supply monitor to detect overloading.
Posted by vysocan at 15:59 No comments:

Doing some experiment on my testing gateway I have put new pigtail on. I like to leave the SMA connector little loose, as it sits on table and is able to lay down completely when I move it. Staring gateway up, I was not able get response from nodes located further away. And I started to check if automated power level feature implemented in RFM69 library is working properly. ... It ended up that I have added new sensor type in gateway as well as the example sketches for radio nodes called TX Power. It shows the current TX power setting out if possible 32 levels present in RFM69 chips, and translate them into 3-100% float value transmitted to gateway. I did not put 0-100% as 0% made me little worried :) Bellow is picture presenting data from my testing meteo node, now with TX Power level.

Just to say, all was working OK before I added this, only my SMA connector inner ring was too lose. It took 2 second work with piers to fix it. At least it brings nice new feature :)
Posted by vysocan at 13:05 No comments: