It has been a while when I started real world testing of the whole system.  I have polished the code, fixed few bugs. Now I'm deciding that do next. I have few things on mind:

1. Design new PCB, bigger with all things on it. I have moved from Eagle to KiCad, and curently designing something like this: 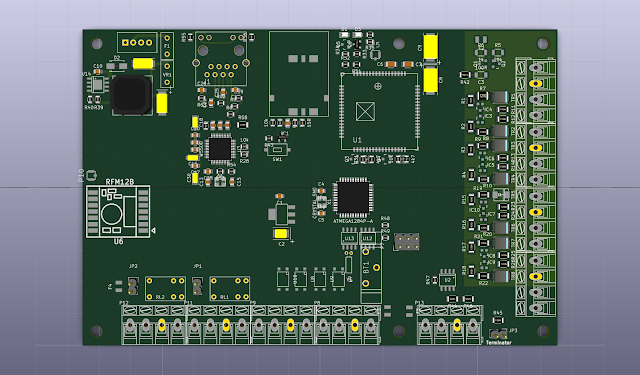 It has WizNet W5500 Ethernet chip, SIM900 for GSM, and also some other improvements like better analogue protection. Size would be 10x15cm and it will be drop in replacement for any old wired burglar alarm.

2. Move the software to Arduino 1.6 to resolve the last bug with SPI transactions. Ethernet library disables interrupts and very seldom some interrupts are missed, causing a radio or RS485 packet to be not seen.  That would mean to rewrite libraries too, namely W5500 and RFM12B.

For me all that work for many months is just fine, but I would like this to maybe become some kind of community project, so I'm not alone in this. I would gladly accept any hints, help in coding or design, or give some help to anyone.