I have used my recent W5500 breadboard friendly PCB to overcome problem with W5500 directly on gateway. As you may know there is problem with packed loss during transmission, which make it nearly impossible to further debug other parts. I have soldered ISP header on the gateway and used is as SPI to attach W5500 PCB. This works just great! I'm back to 100MHz full duplex Ethernet business. With improvements to Webduino library and some other tweaks, it have gained on speed towards web clients, as well as more time to process things internally in RTOS.

I have stared to test input blocks. Digital ones are same as on old gateway, and tere is no surprise. However analogue part was redesigned, but first test shows it works as expected. I will have to test further what over voltage or shorts it can withstand. I'm happy with that, because I'm more digital then analogue guy :), or better yet software type :D.

I have noticed that during uploading new sketches into gateway, I toggle the GSM module On and Off. This is a bit of drag as you imagine. It could be solved further in software, but I have rather done some changes on pin assignment.  I have tossed out GSM_RESET, as it can be reset hard way by switching GSM_POWER. And change it to input pin reading GSM state (GSM_STATUS). This way software can recognise instantly during start-up if the GSM module is already On or Off.

Next I will test outputs and RS485 interface. Then check power supply fall back and real time battery backup. If all goes well, I'll release final version of new gateway, which I plan to sell as starting point to DIY home security for anyone interested.
Posted by vysocan at 21:00 No comments: 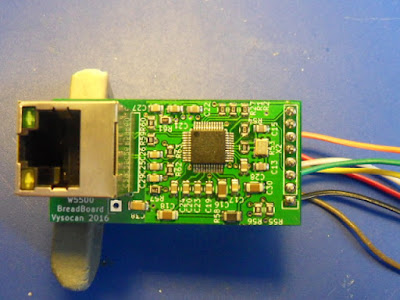 I have put the PCB and assembled board to store section on right. It offers all the function as W550io:
Choose PCB only or fully assembled version.
Standard 0.1" pin header with GND, 3V3, SS, SCK, MISO, MOSI, RST, INT pins.
Schematics are added for download.